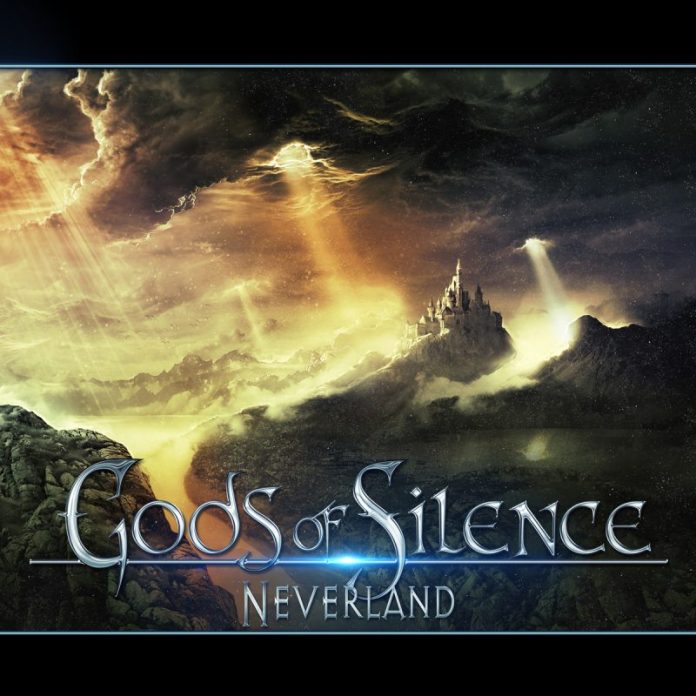 And we’re off to never neverland

Out with the old. Singer Thomi Rauch given the boot after “musical differences” in 2016 and a change of name.

In with the new. A brand new moniker. What used to be Kirk became Gods Of Silence  and fresh vocalist, Gilbi Melénde and its all systems go for the re-invigorated mob.

In part because one thing has stayed the same. Dennis Ward is still here twiddling the knobs and when the Pink Cream 69 man gets involved in anything you know damn well that it is going to sound superb.

Epic, but never to the point of being out and out prog and bombastic, but never as overbearing as some Euro Power Metal, instead “Neverland” sits somewhere between the two most comfortably.

After the intro, things really get going with the quite brilliant “Army Of Liars” which cheerfully occupies the same type of hinterland as Symphony X, while there is most definitely a fists in the air type glory about “Against The Wall”.

Musically this is marvellous stuff, with the guitar work of Sammy Lasagni adding a chug here and a flourish there, while the keyboard work of Bruno Berger is well thought out and adds to the sound rather than smothering it, as often happens.

The title track is perhaps the most epic sounding thing here. Dream Theater are a clear influence and why not? But it is impressive that they manage to get such a soaring thing wrapped up in five minutes.

It’s this attention to brevity – prog metal with the extraneous fat removed, if you will – that both sets Gods Of Silence apart and makes “Neverland” (the album as well as the song) quite so good. Not to mention that in Melénde they have found a vocalist of real skill, capable of taking the darker and more metal moments such as “Full Moon” and owning them too.

Not to be outdone, drummer Philipp Eichenberger drives “Phoenix” forward skilfully, and his machine gun thumping at the start of “Demons” is rather at odds with what is for the most part a track with more balladic intentions – like everything else here, though, it works superbly.

“Wonderful Years”, which casts the frontman in the mould of Russell Allen again, is the closest things get to a full on European style parping freakout, while “Alone” adds an operatic, quasi classical feel just because it feels it needs to.

Confident and classy throughout, the fact it never deviates too far into non-metal areas also means that Gods Of Silence have largely perfected their sound and achieved their aims on “Neverland”. “You Mean Nothing More To Me” is – for this album at least – a brutal put down and shows a more vicious side which has perhaps not been easily visible elsewhere. It adds welcome colour, as does the urgency of the bass groove which ushers in “All My Life”, which in turn brings the record to a clenched-fist close. No mean feat for a love song.

And just think, if your love songs are heavy, that makes you pretty metal, right? Indeed, on “Neverland” that is a feeling that the band, experienced veterans though they may be, are starting again. Gods Of Silence are making their point very loudly indeed. Ignore them at your peril.