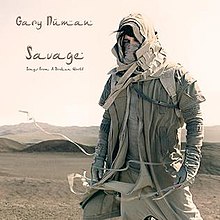 The electro-pop pioneer continues his industrial dystopian journey into the future on his latest album but this time it comes with Eastern flavour and more sand and grit than a desert wasteland.

Over twenty studio albums in for the progressive industrial shapeshifter and he has continued to redefine his musical legacy whilst keeping within the industrial electronic rock heartland that he calls home.

His previous album. Splinter, in 2013 brought us “songs from a broken mind” but now his vision expands into the world and what a world it is to become in the mind of our protagonist.  Predictably, and probably accurately, he has not gone for glass half full option!!  At times haunting and sinister at others beautiful and lush.  Although the latter moments are rare compared with the grim predications of Mr Numan.

“Ghost Nation” starts the album, which was announced in 2015 as part of the Pledge Music Campaign, with a twisting and vibrant dark wave intent that sets the scene and template for what is to follow. When the openings lyrics to the album are ”We live in a windswept hell” to be followed with “We are embers in the flame, we are whispers in god’s name” that echoes the futility and desolation of the world, then you know that the future is decidedly bleak.

The album’s concept is pulled from the blending of Western & Eastern cultures.  The setting is a post-apocalyptic world that destroyed itself due to global warming and the earth resembles barren desert wastelands, in which people will do anything to survive.  However, despite the rather grim subject matter this is truly inspiring work from Numan.

Those familiar with the industrial landscape of Numan’s work in the past two decades will be comfortable and reassured by the epic sci-fi-esque sound.  Also lyrically Numan is as sharp and cutting as he has ever been and never more so than on the dynamic “Pray For The Pain You Serve” or the swaying and hypnotic “Mercy”.

As fans would expect the atmosphere is rugged and intense with clashing guitars and synths dragging themselves across the tracks backed by controlled drums and flashes of eastern sounds and emotions.

At times you wouldn’t be surprised if the voice of Marilyn Manson were to appear, a link that has been made more than once about his style, such as on the opening riffs of “My Name Is Ruin”, which was the album’s lead single,  instead he employs backing vocals from his 11 year-old daughter Persia to stunning effect.

There are moments of subtle introspection such as the opening of “Bed of Thorns” or “The End of Things” but the prevailing wind is blowing towards the empty deserts of modern-day politics and the impact it may have on the future.  Don’t say we have not be warned.

This is one of Numan’s most complete visions and proves that his talent and drive are still pushing him forward into new and exciting territories.

When you are as free a musical spirit as Numan, allowing yourself to go places the music and feeling take you, then there are no boundaries and nothing is off limits.  A true visionary and musical pioneer that seems to be improving as he continues his relentless journey.

Savage (Songs from a Broken World) is out now.