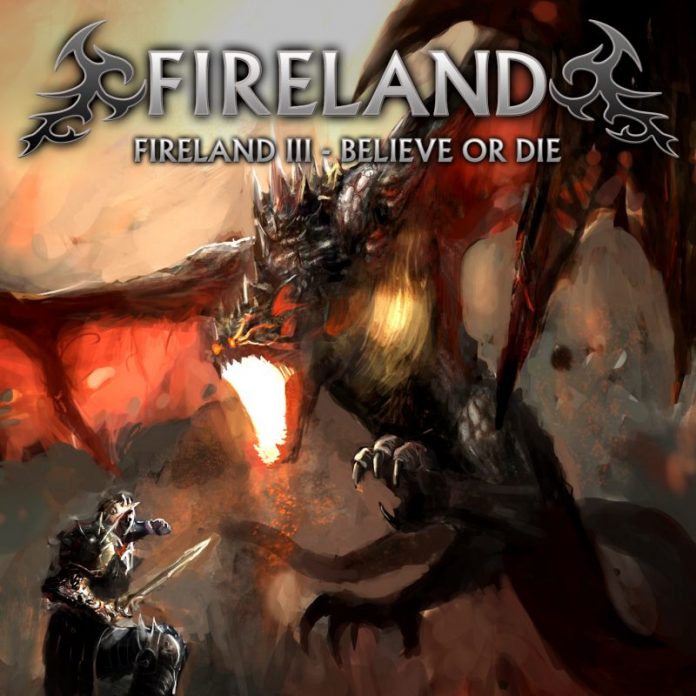 Forget the music just for a second, even before you put this record on, everything about the third album from Fireland screams class and quality.

The cover – about as metal as you could possibly get – the name of the album, blimey even the name of the band, tells you that “Believe Or Die” is set to be quite a trip.

Happily, the album more than lives up to those initial thoughts.

It is a different Fireland than before too – not radically in as much as this is not a dubstep record and it still knows its way around a Maiden-type gallop – but it is a more Euro and bombastic collection than perhaps previously.

Much of the reason for that is that band main man Steve Moore (also of Stormzone) finally found a vocalist in David Brown (Chaos Frame) who could carry off his vision. Brown does a stunning job throughout, as the band as a whole moves to another level here.

The nine tracks come bursting out of the traps with the fists in the air chorus of “John Rock” and in reality there is no stopping throughout the rest.

The title track pulls off the neat track of sounding epic in only five minutes, “My Enemy’s Enemy” seethes with an undercurrent of rage like Blaze Bayley at his best, “Ironclad” is a wonderful example of how metal should get played in 2016 and is a real highlight of the collection, while “Burning Scarecrow” chugs like it has serious business to attend to.

Indeed, this is one of those rarest of things. A record with barely anything approaching a weak point. It doesn’t matter where you look there is something superb staring right back at you. “Hell Hotel” wherein Brown is at his most varied and unsettling is quite unexpected, but there is no doubt at all about the most ambitious thing here.

“Fallen II” is a sequel to a track that originally appeared on their 2008 debut, and there is so much packed into its nine and a half minutes that it amounts to a potted history of metal, and its soaring intentions are sure to make this as much of a favourite as its predecessor was.

“Murderhole” by contrast to it is a little understated, but even with the throttle pulled back there is something special here, and the use of keyboards and threatening in “Hate Will Live On” take that into modern areas that perhaps this band have not been in before – and the orchestration effects give it a real sense of grandeur.

There have been many albums of this type this year as genuine heavy metal – as opposed to a load of kids in skinny jeans recycling Meshuggah riffs – has undergone a real renaissance, just recently on these pages we’ve reviewed new stuff from the likes of Hammerfall, Civil War and Freedom Call, this might just be the best of the lot.

We’ve often said on MV that this type of traditional metal, power metal, call it what you will, is what people who don’t like metal think metal sounds like. That’s still true, only with “III- Believe Or Die” Fireland have made something that should be played to most of the other bands around to show them how it should be done too.