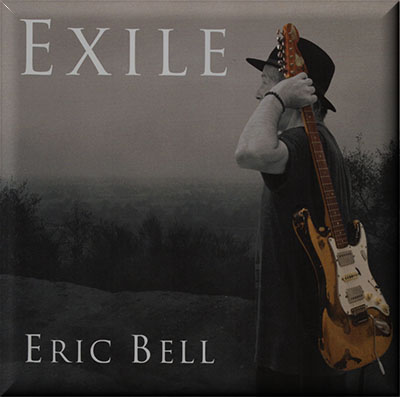 The rock legend gets personal. And the results are brilliant

For this, his first album in seven years, Eric Bell decided to do things his own way. That meant going into the studio on his own with just his Producer Andy Quinn, Engineer Mark Winterburn and drummer Joe Oakes (all other instruments on the record are played by Bell) but moreover, it meant doing precisely what he wanted to.

He took the vibe, he says, from his four years as guitarist in the greatest hard rock band in the world (Thin Lizzy, should there be any doubt as to that) and decided to make the sort he liked.

The results are stunning.

And he’s as good as his word too. There’s a laid back country-ish feel to “Deep In Your Heart”, there’s a Stones’ like, loose limbed structure to “Don’t Love Me No More” – it’s completed by some incredible Jagger-esque falsetto vocals at the end – and there’s dark jazz afoot in “Gotta Say Bye Bye”.

“Exile” features songs that have lain dormant for years, but it never feels like a rag bag collection, instead it is a wonderfully cohesive piece of work. It’s a wonderfully acerbic, world weary thing in places too. “Vote For Me” takes modern politics apart and offers no answers as to how it could be improved, for example.

But, even from the title, it feels a deeply personal album too. “Concrete Jungle” is another to offer no hope to the person living in squalor, which you’d guess was Bell in the early days, but it’s not all bleak and there’s a gorgeous simplicity, even naivety, to “Little Boy Running” while “Thank God” makes no effort to hide Bell’s religious conviction over another country strum.

This magnificent record saves it’s best – and probably most personal – piece of work for last. “Song For Gary” is palpably charged with emotion as Bell literally narrates the story of his first meeting with Gary Moore. After the second verse deals with his friends death, he cuts loose with one of the best solos you will hear in 2016, and anyone who believes the guitar can’t talk isn’t listening here.

Bell reckons he became disillusioned with making records over the past few years. Be very glad that he turned that feeling into songs this good, and be extremely thankful he has ended his exile.