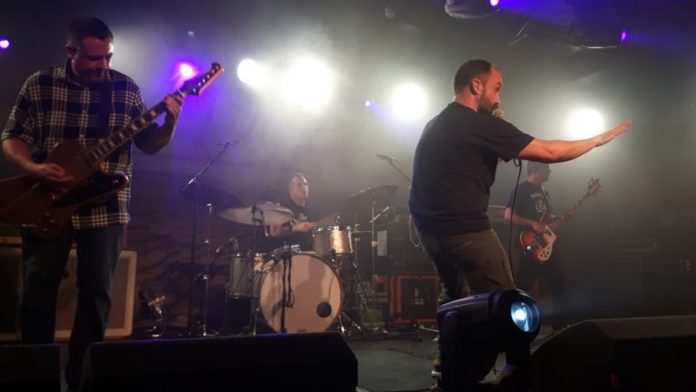 In the blue corner, its Bernard, and he’s declaring the Heavyweight champions of the world

I’m not a big boxing fan but I’ve often heard the pundits on TV discussing the virtues of different boxers before declaring one to be the best pound for pound fighter in the world. Well, that’s how I think of Clutch – they deliver on all fronts without being the biggest sellers or the biggest concert draw. After all these years they are still critically acclaimed, they have a hugely loyal fan base, the recorded music goes from strength to strength, they deliver every time on stage and most of all, they rock as hard as anyone out there. So it was for these reasons that we found ourselves travelling to Belfast to catch the only full indoor show in the UK this year.

We got to the venue nice and early and were near the front of the queue, so ensuring pole position inside – we located ourselves directly in front of Tim Sult’s rig and prepared for the wait.

As 9.30pm approached the lights dimmed and Chuck Brown’s ‘We Need Some Money’ thundered out of the PA. This immediately lifted the atmosphere within the room and as Clutch took to the stage the place was electric. They launched into opener ‘Crucial Velocity’ and the crowd went reacted as one to the music emanating from the stage. They picked a great set list for this show and a few of the tracks deserve special mention. ‘Cypress Grove’ is one of their best tracks and as they moved into a drum/bass section in the middle, they sounded so funky that I thought where are the horns? However that thought was immediately closed down as Tim Sult fired off a solo that was the sonic equivalent of tracer bullets – a hair on the back of the neck moment. Two new songs were played in the middle of the set – ‘A Good Fire’ and ‘How To Shake Hands’ are two of a number of tracks the guys have been road testing this past few weeks in readiness for the next album. These tracks were as good as anything I’ve heard them do, loads of crunch and with razor sharp lyrics. This is particularly true of ‘Shake Hands’ – what a song. There are very few Clutch tracks over the years that I’m not keen on but ‘Son Of Virginia’, from the latest ‘Psychic Warfare’ album, is one of them. In truth I thought it was a bit of a dirge on record and was played that way when I heard it in Bristol 18 months ago. Tonight it was a revelation – I’m not sure what they have done to the arrangement but it seemed to have a bit more blues about it with a chunky riff and it just sounded fresher. I thought it was just me but my wife said exactly the same thing after the show – so two opinions changed. ‘D.C. Sound Attack’ is a great closing number – the aforementioned Chuck Brown must have had an influence as the funk is strong with this one – more cowbell indeed. That just left the encore and there isn’t a better two song salvo in rock at the moment than ‘Electric Worry’ and ‘X-Ray Visions’. 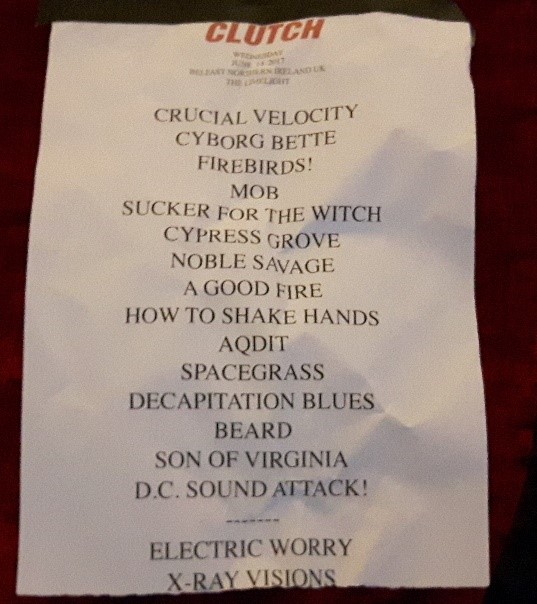 When a Band has been together as long as these guys, a confidence is evident on stage – they know they are good but still work incredibly hard to make sure they keep the highest standards. However this night they seemed to be even better than usual – it was a night when they were properly ‘on it’ and it was no surprise at the end of the show to see the usually emotionless Tim Sult,half- smile and nod a couple of times as if to say ‘that was a good one’. We always stand in front of Tim when we see Clutch as I think his guitar playing is brilliant – vastly under-rated in the rock scene in my opinion. His new Firebird guitar sounded great and the riffs and solos just kept on coming. Next to the rhythm section; Jean-Paul is unique in the hard rock world as he has a funky swing to his playing – there are not many drummers I watch during the show but I like seeing how he feels everything he plays. Dan on base is a machine – looking more like ex. Special Forces on a weekend off, he locks in rock solid with JP and drives each song forward. That just leaves Neil – what a front man he is. Visually great with a vocal delivery that reminds me at times of a Simon Callow type Shakespearian actor (never thought I’d use that name in a heavy rock review!). Neil seemed fresh and enthused throughout, as did they all really. Whether it was the fact they had the previous night off or whether Belfast is one of those places that bring out the best in touring bands, I don’t know. What I do know is that Clutch were on a different level at The Limelight to the many other times I’ve seen them.

My only concern out of all of this is what next for them? The Limelight was an excellent venue with a cracking sound system but its small (I think 750 capacity). I wish Clutch every success but equally, I will be disappointed if they move to the big venues on the circuit. This was a great place to see them but for how much longer? If the next album is as good as I think it’s going to be, it might not be long at all. After all, money does talk and this isn’t a hobby for these guys, it’s how they raise their families. Still, that is for another day. In the meantime I will continue to reflect on a truly great concert.

Clutch – pound for pound the best rock band in the world.