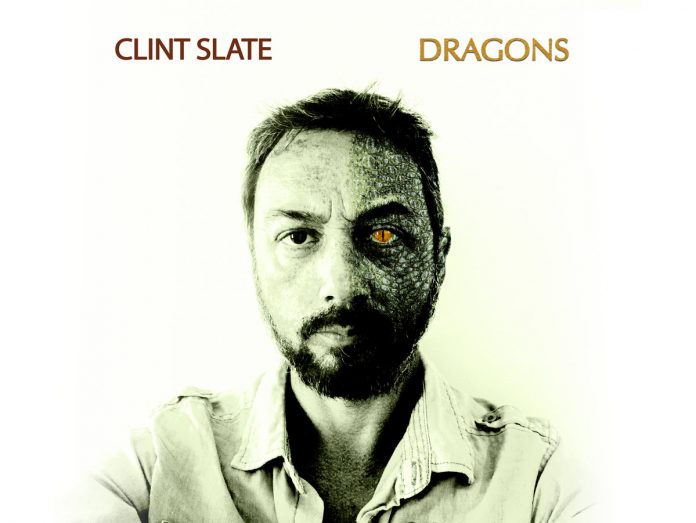 projects` approach to his new release “Dragons.” He had previously released two albums with “Before The Dark” in 2015 and “Woodn Bones” in 2017 and had a third album in the can, a prog concept called “the Last Man.” Understandably he was reluctant to release this until he can ensure it`s shared with his audience, post Covid. By May last year he`d recorded and released fifty cover versions of songs which he shared at the rate of one a day.

After some research and soul searching, he decided to send some melodies, riffs or ideas to Francesco Arzani and Louison Collet, fellow musicians and ask them to contribute ideas remotely. He then added guitar and reshaped them to form the album tracks.

He also decided to use a literary technique that can be traced to the Dadaists of the 1920s in which a written text is cut up and rearranged to create a new text, popularized in the late 1950s by writer William S. Burroughs to formulate the lyrics.

The album opens with `Sunset, Nova and Earth` as Clint has confirmed it`s a more urban offering. It begins with a sort of spoken word almost rapped quality before moving to a melodically sung composition at the chorus. There`s a delightfully soulful, gospel, trippy feel to this number. A wonderfully mellow introduction. The relaxed vibe continues with `Reconciliation TV (The Love Tides)` which has some enjoyable melodies and a superb guitar solo towards the latter end of the song.

`Ghost America` is a superbly unnerving piece almost what you`d imagine being played in times after an apocalypse. A hypnotic drumbeat and bass guitar led us through this quite atmospheric number that reminded me of David Bowie`s later albums “The Next Day” and “Blackstar.” The artist has said that there was an eighties touch to `Dead Noise` and it did seem to be a number that Talking Heads could have released. Again, it had that marvellously unsettling vocal delivery.

Clint has shared that `Dark Is Wire` would be classed as ambient and it certainly is. It has a dreamy texture with some wistful vocals and melodies. The bass even seems to be quietly shared and there`s a glockenspiel played almost unobtrusively at times throughout. An edgy bass line leads us into `The Sixth Trip Plan` which seems to roll along with a pop like flavour. The lyrics so offbeat they almost seemed to make sense.

`Obstacles` is the ballad and it does have a poetic energy about it. But at times it felt like a prog rock aria with keys, drums, bass, and intricate guitar aiding the sweetly sung vocals. Clint stated that `Systems and Batteries` would be associated with the Industrial genre but I felt it had some drum and bass overtones or possibly leaned more to electronica. Nevertheless, it was another meditative, reflective, and tranquil submission.

We close on `Smash` which has been deemed the rock number. There`s a superb build up as you can hear the frets as the guitar is played quietly at the start but builds up as the vocals seem to breathe life and awaken something within. A stunning guitar solo is shared midway before it`s back for more of the same build up and another slice of guitar shredding towards the end.

This is a remarkable release that had so much to offer the listener. There`s a range of styles giving it a real diversity. The lyrics are a little unconventional but make it a highly original body of work, offbeat, quirky, experimental, avant-garde, surreal but most of all thoroughly enjoyable. I loved the concept of how it came together and have mention the guys who contributed to it`s fruition with Francesco Arzani on bass and Louison Collet on drums. The remainder vocals, electric guitar, acoustic guitar, keyboards, and bass coming from the creative force of Gregg Michel.

I appreciate it`s only the first week in January but I think I may have found my album of the year.