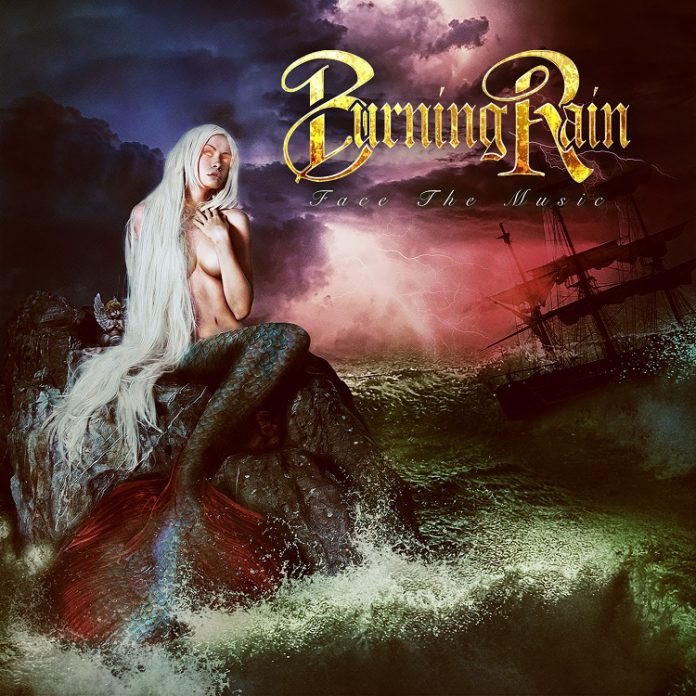 Fake news is just the modern way of saying: you lying piece of filth. I won’t have it.

So here you go. Before this album was sent to me, I’d never heard of Burning Rain.

Why that was I couldn’t tell you, given that it contains Doug Aldrich. You know, the literal physical embodiment of LA hard rock cool – the fella who stood there in Whitesnake and look like a guitar god and the one who looks like he’s having the time of his life in Dead Daisies now.

And if that’s not enough the singer in this here thing is Keith St John. He’s the one who was in the revived Montrose, and when Kingdom Come needed a new bloke, he’s the man they chose.

If all of that isn’t enough, a quick Google reveals the first album came out in 1998. So, yeah, look, I’ve got to apologise here because to not know this band is a tremendous gap in my musical knowledge.

But, in the spirit of better late than never and all that, I’m here at the party eventually. And on “Face The Music”, Burning Rain have brought some very tasty nibbles indeed.

Arguably the best thing about all of this, though, is that it sounds proper sleazy. God knows what they’re up for, but you can bet they aren’t saying no. They’d probably try it on with the mermaid on the cover in all honesty.

That feeling seeps right through from the bluesy opening to “Revolution” which swaggers with more confidence in its opening 30 seconds than I’ve ever had in the whole of my life.

Such things come from the outright skill that is on show here, though. “Lorelei” is epic hard rock if that is a thing. Something overblown, but still crunchy, it is a neat thing to be able to do, and it does seem as if BR can do it with ease.

However, like I say, Burning Rain want to get wet, as it were. “Nasty Hustle” is the sort of thing that was meant to die with grunge, but its fun and you can’t deny it. “Midnight Train” – the record’s first single – is about the millionth song to have had that title, but when that lead guitar hits no one is going to give a monkeys to be honest. The bass too, moves mountains here. Brad Lang (who filled in for Y & T a few years back) is in fine form throughout, but this is his moment.

“Shelter” is stripped down and reveals a more acoustic, sensitive side. It merely acts as a bit of a palate cleanser, though and it builds itself into a bit of a frenzy, and shows, actually that St. john is perfect for Kingdom Come.

The title track has some southern rock touches, and sounds a bit like The Dead Daisies’ “Last Time I Saw The Sun” while its at it. And if the rest of it has rather flirted with sounding like Led Zep, then on “Beautiful Road” the flirting stops and they’re making a serious move.

“Hit And Run” has many things on its mind, and all of them are for late at night. You can’t even call these double entendre’s. They aren’t that subtle. “put me in the middle and play me like a fiddle” is really one of its lines. Nickelback could cover this and put another wing on their mansions.

“If It’s Love” comes from a different place and you can actually imagine David Coverdale ringing up Aldrich and trying to get this on his next record, and if nothing else “Hideaway” proves that Doug Aldrich is an operator from the very top drawer.

“Since I’m Loving You” ends the album in much the same fashion as the rest of it, and it sounds, well dazed and confused – choice of words intentional – it also sounds like it belongs to a different time.

More accurately, perhaps, “Face The Music” sounds like it’s the work of men who understand classic rock n roll and moreover don’t care what era it is at all.

It hits its target superbly too. Plus you’ll be so hot and bothered after listening to it, you might need a shower.