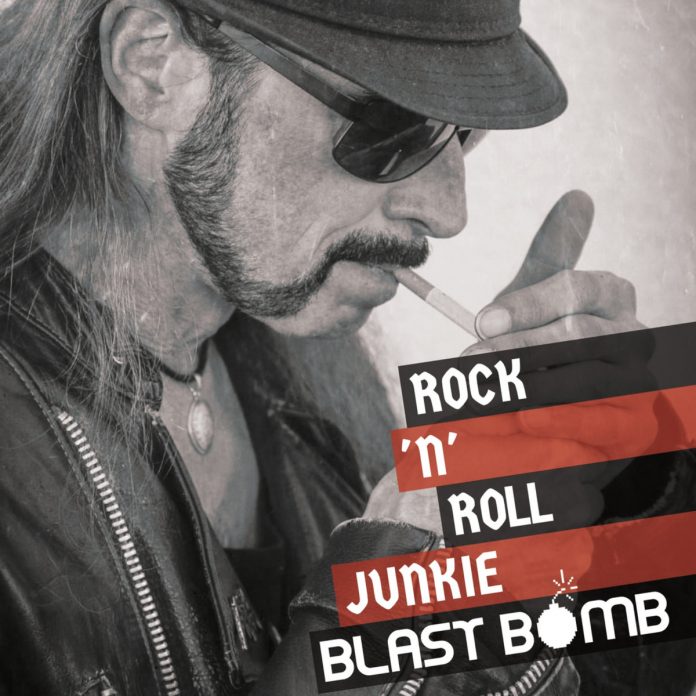 The title track on this four track slice of sleazy, dirty punk is basically where this review should begin:

“The only way I know, on the road we call we rock n roll” sneers Johnny Rose, over a brew that is equal parts The Wildhearts, Motorhead and pretty much any Scandi punk band from Glucifer down.

And that, actually is where the review could stop, because that’s it, really, but no. I am a huge fan of Blast Bomb, and have been since JR sent me the “Live And Explosive In The UK” album to me last year for review.

Punk rock rarely sounds as dangerous as this, these days. It’s like the vitriol that’s spat over the opener “Go Away” – where the band genuinely sound like they are the last gang in the wrong part of town  – ensures that it is shot through with a genuine menace.

“Outta My Mind” essentially repeats the dose, and you can only imagine the levels of debauchery that are seen on the stages of their native Hamburg (Rose is an Englishman who is from the West Midlands, where we – note the wording – know a thing or two about music) and as the solo screeches, you are propelled back into whatever rancid basement this was conceived in.

Best of all, perhaps, is “Bulletproof”. Beginning with the words “I am in the mood for trouble tonight, its been one hell of a week, one hell of a fight” and that’s the point, This is for the weekend warriors, the working class heroes, if you will and when he offers: “I don’t care if it’s wrong or right, I want you on your knees tonight” it encapsulates the devil may care and I’ll worry about the consequences in the morning vibe.

This is the precursor to a full length (double entendre intended) and that is going to be fun. Blast Bomb, to be clear are the type of band that were they not in the band, they’d be at the front watching someone play music just like this.

Chances are, though, it wouldn’t be as good.