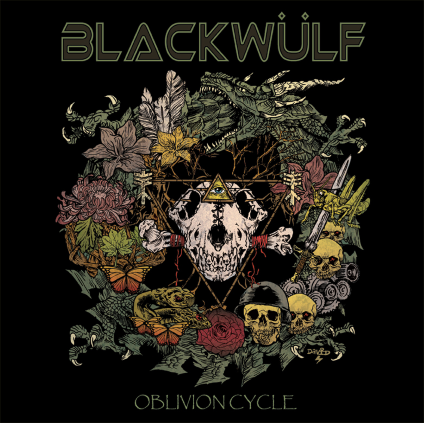 The soundtrack to the apocalypse has arrived

Living in England you look at California on TV and imagine it as some kind of utopia where everyone is beautiful, lives in the Hollywood Hills, drives around in some flashy big car or other and the sun? Well it’s always shining.

Of course the reality will be different, and no doubt it’s as grim as anywhere else (although the sun does always shine, surely?) but if the reality is as depicted here on “Oblivion Cycle”, the second album from Oakland’s Blackwulf, then Christ, you need to get out quick.

Because, blimey lyrically this is bleak.

Pick any song at random and the first line takes you into some pit of horrible despair or other. “Faith Healer” suggests “they are watching and waiting to grant you escape from the agony of life”. While “The Locust” (a track we’ve previously streamed right here on MV) is reckoning that “he feeds on society’s blessings”.

This is heavy – in all meanings of the word – stuff. So why, then, is “The Oblivion Cycle” so downright marvellous? Well firstly, precisely because it’s bleak. After all you can count on one hand the amount of happy bands that are any good. But it’s actually about much more than that, because if you took the best bits of heavy metal, stoner rock and added a bluesy swagger and a whole heap of nihilism, then what you get out the other side is this right here.

For example “Wings Of Steel” might sound like it’s going to be a Saxon song, the reality, though, is a slamming call to arms, and “Red Eyes” has a Mastodon-like swirl and a driving, thumping riff that hypnotises.

Not a record to outstay it’s welcome either, with nothing too long, “The Oblivion Cycle” changes pace adeptly when it chooses, “Dark Tower” is a wonderful ballad with echoes of Led Zeppelin, and “Never Forget”, which manages to come on like Orange Goblin covering Alice In Chains has both a groove and melody.

Ultimately the best thing about “Oblivion Cycle” is that never once does it offer solutions. It merely comments on the state of the world as Blackwulf see it. The cycle is concluded, you might say, by “March Of The Damned” which depicts a world that’s going to hell in a handbasket and where there is resolutely no light at the end of the tunnel. But it does it over a slice of doom that would make Black Sabbath blush, so at least somewhere things are just about right.

You know those days where you hate your job, your loved ones, whatever sports team you support has lost, and everything is pissing you off for some reason or another? So do Blackwulf. It’s just that they – unlike you, or MVM for that matter – have turned their desolation and anger into something magical.