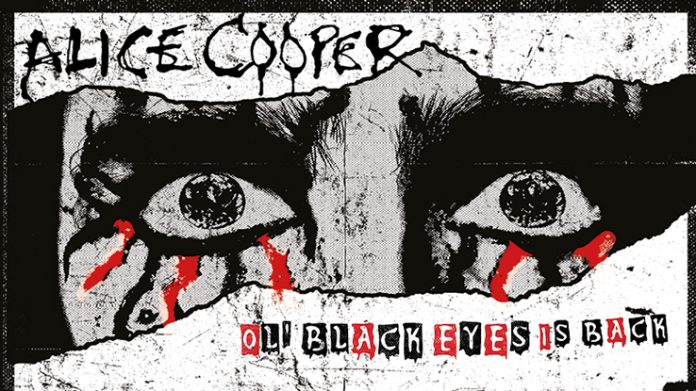 Donnie & Andy take in their annual Alice Cooper gig and this time he has brought some very special friends along for the ride.

I don’t know how many thousands of gigs that Alice Cooper has performed but every one of the dozen or so that I have been fortunate enough to witness he plays every one like it’s the first, and last.  Life on the road can get weary, as many artists will have told you about, but Alice Cooper knows how to play the game and how to ensure that come show night the ringmaster is in pristine condition and ready to deliver.  He’s a showman, it’s just what he does.

First up though Alice has roped in one of the most revered bands in rock history, MC5.  Their initial burst of glory lasted a mere 3-4 years and produced just two studio albums.  That was back in late 1960’s – early 1970’s.  Hailing from Detroit, Michigan the band took their name from the nickname of their hometown (Motor City 5) and, just a local heroes Black Sabbath utilized the heavy and industrial sound of their native Birmingham, MC5 would define the sound that their city would become world renowned for, namely garage rock.

The familiar tale of rock n’ roll disharmony caused the bands downfall but a reunion came about in 2003 when three surviving members, sadly vocalist Rob Tyner had passed away from a heart attach some years earlier, came together to do some shows with various special guests standing in for the dearly departed.  Fast forward to the last 18 months or so and things have never been busier as sole original member Wayne Kramer celebrates the music of his band, now rebranded as MC50 in honour of the half a century of music, although technically they formed in 1964.  This modern day version includes rock luminaries such as Billy Gould (Faith No More), Kim Thayil (Soundgarden), Brendan Canty (Fugazi) and Marcus Durant (Zen Guerilla).

The classic “testify” opening words lead into the glorious “Ramblin’ Rose” and we are off and running. No sooner had the senses returned than we were thrust headlong into the sublime “Kick Out The Jams” with a ferociously tight and menacingly evangelical sound.  Following that was just 30 minutes of pure rock pleasure.  “Motor City is Burning”, “Sister Anne” and “Tonight” merely confirmed that live rock music does not get any finer.

“Looking At You” closes out the set with barbed comments aimed at world leaders, particularly their homeland commander-in-chief Donald Trump, for their collective failures.  Fair point, well made, as the UK knows only too well.  Those who managed to get down to the arena early were, in Wayne Kramer’s own words the “clever ones”.  You will get no dispute from me.  All killer zero filler.

Tough act to follow for UK punk heroes The Stranglers but they are certainly up for the challenge.  The twisting “Toiler on the Sea” and “(Get a) Grip (on Yourself) are the opening salvo’s from a band not too far off 50 year celebrations themselves, 45 years and counting.  The band have an iconic sound that is clearly The Stranglers and they display their originality throughout their 45 set of hits.  “Nice ‘n’ sleazy” comes on and wins the audience over, although Bluenoses (supporters of local football side Birmingham City FC) got slightly ansty, yours truly included, when guitarist/vocalist Baz Warne advised an afternoon watching The Blues at St. Andrews on a Saturday afternoon as an example one of the worst places to be during “Peaches”.

They manage to get back in the good books by the time the closing duo of “Hangin’ Around” and “No More Heroes” bring their energetic and classy set to a close.  Much kudos for including the genius “Five Minutes” arguably their best track.

Fortunately Alice Cooper is a regular visitor to UK shores and when he comes he comes ready to rock and roll and thrill his audience whether they are there for the first time or the 100th time.  There is no sensible reason why a rock fan of a certain vintage should not have seen Alice Cooper before however a pre-gig beer in the local boozer I came across such a vintage rocker.  Stranger things I have heard for sure but I must admit a momentary deprivation of senses when he uttered those words “In 45 years of gig going I’ve never seen Alice Cooper before”.  In some ways I felt jealous of this man.  Although a veteran of many a Cooper gig myself he was about to see the master showman for the very first time and get those chills and adrenaline high that comes with seeing such an artist.

The hairs on the back of this guy’s neck will have stood bolt upright when the strains of “Feed My Frankenstein” kicked in and out walks ‘Ol Black Eyes resplendent in top hat and full Cooper garb.  For the next ninety minutes it is pure classic rock and theatre.  From the old school “No More Mr. Nice Guy”, “Raped and Freezin’” to the modern “Fallen In Love” peppered with mid-way classics such as “Bed of Nails” and “Poison” it is a masterclass on how to hold an audience in the palm of your hand.

Cooper is a man who will always play the hits but here he also finds space in the setlist to include some less familiar tracks such as “Rose On White Lace”, “Escape” and the main set closer “Teenage Frankenstein”.  One major surprise was the inclusion of the theme song from Friday 13th Part VI “He’s Back (The Man Behind The Mask) which seemed to go down well, especially with the special guest appearance of Jason Vorhees!!

Macabre theatrics have been a hallmark of Cooper’s career and at the age of 71 years young there are still a number of tricks left up his musical sleeve.