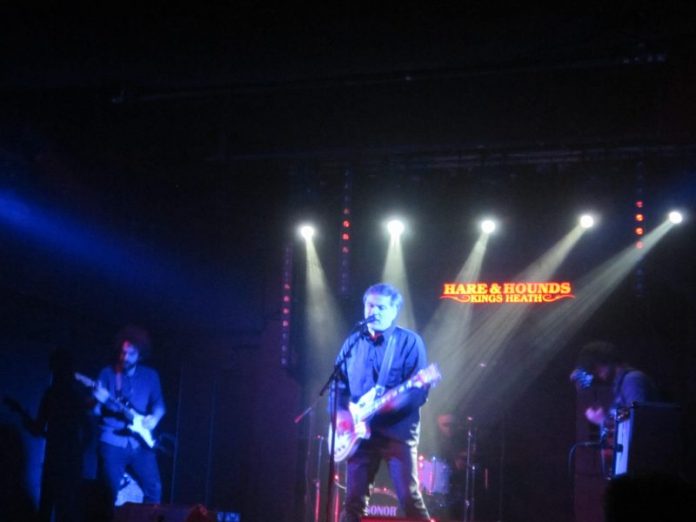 Damian reports from the wilderness

A few crashed chords and the boys christened on this tour as Nick Harper and The Wilderness Kids arrive on the stage. A quick “Morning and “I`m now in a gang” from Mr Harper and it straight into “Lies! Lies! Lies!“  the title track from recent release. The new album is really a snapshot in time of how these fellas see the world. Nick has assembled some excellent musicians around him with Jacob Tyghe on bass, Reuben Tyghe on guitar and Isaac Phillips on drums. A couple of these fellas usually hit the road, as Port Erin. One thing that Harper Junior has inherited from his father, Roy, is the ability to relate a story and, so it goes with the next track from the new release “Nobody Loves You” which is about the American folk legend Woodie Guthrie and his fight for a better habitable standard of accommodation whilst renting in New York in the 1930`s. His landlord being a certain Mr Trump and father of the current American presidential incumbent. He fought against the squalor that he was expected to endure. A break from the political ire with a song named “Leaving The Club” about just that leaving a club and regretting it once you`ve left and being unable to return due to lack of funds. The song is almost disco-y in its presentation. Mr H shouts it`s only 360 days to Black Friday and that`s what we get the song “Black Friday” Nick`s best mate`s wife Tiina Korhonen happens to be born in Finland but has spent over thirty years in the UK, working in the NHS and has a twenty one year old daughter and is now faced with having to fill out an eighty five page document as to why she should remain here post Brexit. So, the one positive thing from this debacle is a song for the new release with “Tiina” The political diatribe continues with “Magic Money Tree” which is about yes you`ve guessed it!! Politics and Religion follow again with “We Keep Turning Right” and “Have A Nice Deity” “Dark Forces” is shared before the album is closed out on a positive note with “Global Nation” a view that the world will eventually become a better place.

Well once the new album is out the way the second or latter part of the show comprises of a greatest hits compilation or at least some more well-known songs. The wonderful “Blue Sky Thinking” is up first, a love song about an imagined or hoped-for romance. This is a song that really highlights the intricate guitar picking quality that this guy possesses. A song about wealth distribution follows with “The Magnificent G7”, then “Radio Silence” another love song of sorts but this one with some quite heart-breaking lyrics, “Aeroplane” which on the face of it is about taking some mind altering or thought-provoking substances. A magnificent rock out with Treasure Island” before the eclectic “Love Junky” and ending with the chugging “Happy Man”

A brief stage exit before the gang return for the encore of “This Is The Beginning” which came from gaining knowledge of his Mom’s youthlike shenanigans whilst living in France. The tale being shared by his 96-year-old grandfather on a trip to France after his mother’s passing. So, it wasn’t just Nick’s Dad that was Rock `n`Roll !!

This was a really interesting show. I have seen Harper Jr on many, many occasions over many years but am at a loss to remember ever seeing him in a band / group situation. I do like the new release, which was available at the show and thought the band fleshed out and gave a different spin to the more familiar tracks I’ve grown to expect at a Harper gig. He graces the second city with his presence again in the new year and this time it`s just him and his trusty guitar. He is also asking for song requests for these shows via his site, so get voting and you may be pleasantly surprised. Hope to see you all there – one things for certain it will be an extremely entertaining night.