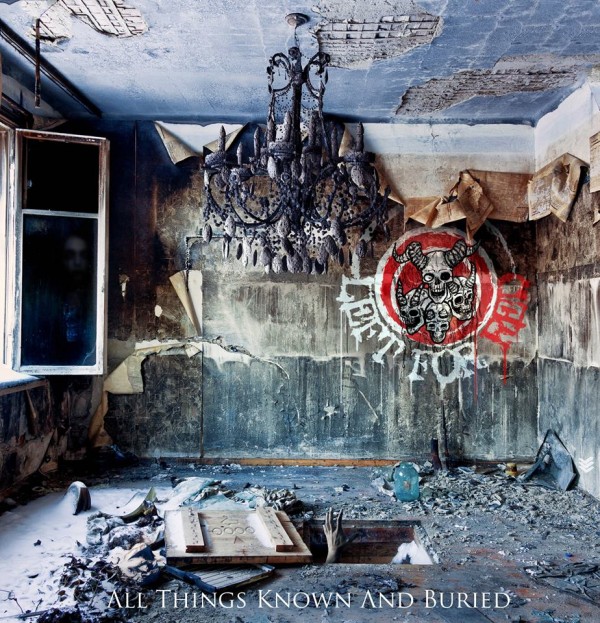 With their couple of EP’s thus far Left For Red hinted that they had a real talent for making muscular metal with a bit of a groove and some technical ability. Certainly their second release “Mercy Flight” (which emerged in 2013) was a huge leap forward and saw them gather quite a following and got them some decent support gigs.

So, some four years after forming LFR are ready for a full-length. And, boy, have they pulled out all the stops!

As befits a band who have been around a little longer than many who are readying a debut album, “All Things Known And Buried” is a confident record, and one which very evidently has huge intentions.

It’s an album that displays astonishing diversity. Beginning with a short chanted intro of “The Masters Call” – readers of a certain vintage may get nostalgic for Guns n Roses’ “Get In The Ring” here – it is soon down to business with the single “Master Of The Game.” The frankly creepy video for this track was unleashed late last year, so there’s no excuse for not being familiar with how good it is. Singer LC Decoy wraps his prodigious vocal chords around a massive chorus and even bigger hook and all, you sense, is just fine and dandy here.

LFR are not ones to settle into a pattern, instead “ATKNAB” shoots off into all sorts of thrilling tangents during the course of it’s just over half an hour. “Crooked Path” begins with a bass groove and is suitably mighty, “Echoes Of A Stranger” can barely restrain itself over its dark environs, and “Shatter” builds into something very special indeed, it’s intro just made, you suspect, to be played live to a sea of people who are bouncing up and down.

A record full of very admirable risk taking – and if it wasn’t, why would there be a two and a half minute lilting piano piece, “Distopia Rising” here? – “…..Buried” is a record that seemingly takes itself off into places that it wants to go, without worry. Straight after “….Rising” the calm is shattered by arguably it’s heaviest track, “Utopia” for example, and “Solace In Memories,” which ends things, isn’t far removed from Prog metal.

On an album with much to get excited about, there are a pair of tracks that really hit hard. “Ascension” comes on like “Powertrippin'” era The Almighty and swaggers along on an enormous groove, but best of all is the quite brilliant “Reborn” which, after sharing the drum hook from Faith No More’s “Midlife Crisis,” gets down, dirty and downright sleazy, and just when you think you have it pegged with its catchy chorus, it veers off again with Decoy’s screamed delivery before the solo.

Those who knew the music of Left For Red, knew they they had the capacity to deliver a fantastic record in them, do not doubt that on “All Things Known And Buried” they’ve absolutely killed it.

“All Things Known And Buried” is out on 27th April. The only place to get a copy before then is to get yourself to the album launch on Feb 28th in Birmingham. Tickets here.