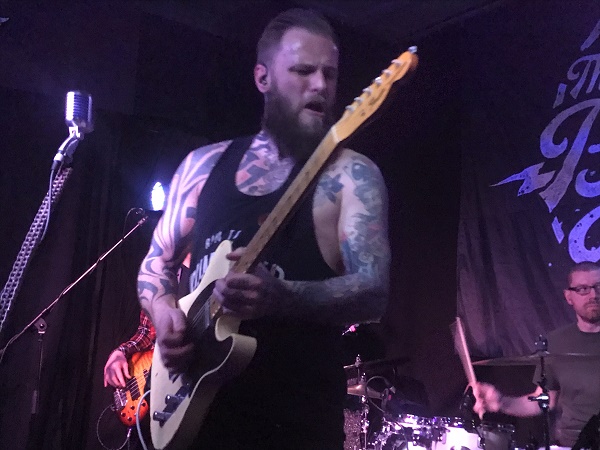 When they played their pre-Christmas shows with Tyler Bryant and the Shakedown, Northern Ireland’s Blackwater Conspiracy proved that basically they distilled rock n roll down to its very essence, here they do it again. Bursting out of the blocks with “Let It Roll” TBC look a little more sure of themselves here. Ready for their first headline gig next week, there is a confidence about them, a swagger if you will, that suits their music perfectly. “Waiting On Hollywood” with its keys to the fore, is from the Stones end of their material, “President Joe” comes from the blues side, and the balladic “Penny For Your Dirty Mind” from somewhere between the two. There is a real skill about the slow-growing “Hanging Tree” but going way back to their previous bands, the boys in The Blackwater Conspiracy have always had their arena rocker dreams – and in frontman Phil Conalane, the sort of singer that can carry them off. “85 Rockstar” is those thoughts made flesh Whether they get there, who knows, but it’s hookline of “live fast, leave something beautiful” makes for a hell of a slogan nonetheless.

Kris Barras stands on the cusp of something. Not only is his new album top of the Amazon and iTunes blues charts, but his gigs are selling out too. The cosy Iron Road is full to bursting, and it might be cold outside, but crikey, there’s sweat running down the walls here. You can bet, actually, that when Barras went on the road in the first place, these were the sort of nights he dreamed of.

As you’d expect, the set is heavy on the new material – which is just fine – because “The Divine And Dirty” is a stellar affair. It is interesting that Barras and his fine band (Josiah J Manning is in particularly superb form on keyboards) begin with one of its more bluesy moments “Wrong Place At The Wrong Time”, because although rooted in the blues there is much more going on here. The soul tinged “Propane” and first single from the record “Hail Mary” prove that. Both are blessed with a chorus that frankly isn’t designed for small venues – and they won’t be here too long either.

A dip back to some earlier times in “I’m Gone” sees Barras play his box guitar, before one of “….Dirty’s” real highlights “Stitch Me Up” turns this corner of Worcestershire into a honky-tonk with mean intentions.

There are a couple of moments of real emotion in the show. First when Barras speaks about his love of Gary Moore before playing a fine version of “Stormy Morning” but then when he talks about his late father before dedicating “Watching Over Me” to him.

Ending the set with “All Along The Watchtower” oddly, shows why Barras is so good. Anyone can cover the Bob Dylan tune (no one as well as Hendrix, perhaps) but few find another side to it, this foursome does.

Returning for an encore of “Rock n Roll Running through My Veins” before finishing with each having a small solo on “Further On Up The Road” you are left with a sense of a band who know their time is now – and one who is absolutely going to make the most of it.