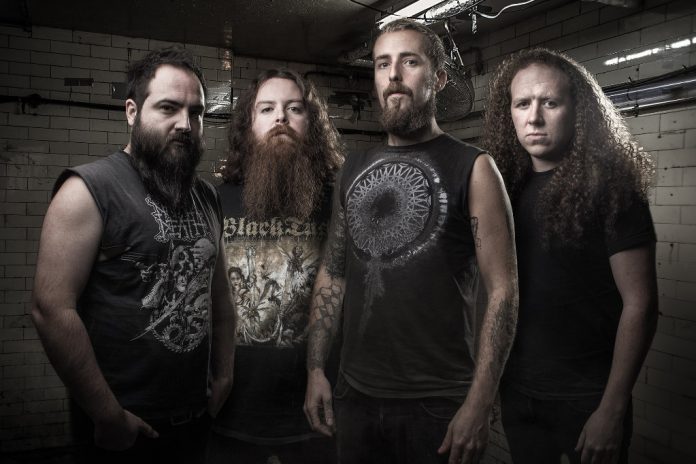 All the skinny on the Welsh heavy rockers

With their second full-length ‘Machinations’, HARK deliver a perfectly crafted vision of sludge-infused hard rock, while further expanding on their simultaneously progressive and muscular sonic palette.

‘Machinations’ is an intelligent, forward-thinking rock record, in an age where cult nostalgia trips and retrogressive throwbacks are all too common. Taking cues from Jimbob Isaac’s sludge metal legacy in Welsh underground heroes TAINT.

In addition to Simon Bonwick’s bombastic drumming, the hard-hitting rockers have meanwhile expanded their line-up to include the virtuoso chops of lead guitarist Joe Harvatt, while bassist Tom Shortt holds the low end down with weighty grind and dexterity. HARK v2.0 is now officially in widescreen. They offer a holistic, collective approach to inventive song craft and beautifully precise pummelling.

HARK‘s acclaimed debut ‘Crystalline’ (2014) displayed a maturity hardly expected from a debut, with global critical acclaim dubbing it a ‘game changer’ in the sludge and stoner rock sphere. ‘Machinations’ was recorded with Andy Hawkins at The Nave (Leeds, UK) and Gethin Pearson at The Bassment of Sonic Architecture (Pontypool, UK). Mixing is handled this time by Pearson, Harvatt and Isaac, while James Plotkin (SUNN O))), ISIS, KHANATE) takes on mastering duties. With this dedicated, hands-on approach, ‘Machinations’ will allow HARK to further spread their wing into spheres unknown.

Jimbob Isaac’s soaring and gritty lead vocals convey the existential angst of living in the media saturated and economically unstable climate from which ‘Machinations’ was born. His fragmented and deeply subconscious lyrical flow, talks of abstracted emotions, spiritual disintegration, toxic encounters, psychic endeavours, and technological overload. Isaac’s complex prose is woven into a sonic tapestry created by he and his band mates that will make heavy rock listeners stand to attention.

Isaac also envelopes this record with his distinctive artwork, creating a pen and ink space-scape, an all-enveloping world of machinated beauty and a fine line near-future. Truly anchoring and expanding the HARK universe in all its pointillised, detailed splendour.

Having honed their live act on tours with the likes of CLUTCH, RED FANG, PRONG, KEN mode and A STORM OF LIGHT, HARK are a genuine force to be reckoned with. Following praised appearances at renowned festivals such as Roadburn, Hellfest, Summer Breeze, Bloodstock, and Damnation, the Welsh heavy rockers have clearly succeeded in transforming their live energy into ‘Machinations’. This newly incarnated quartet is ready to conquer the world!