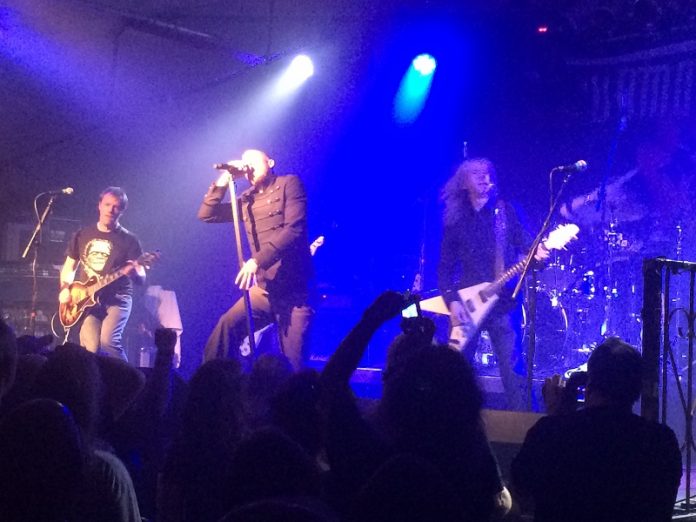 “For this tour” suggests Rasmus Bom Andersen – the brand new and rather brilliant new singer with Diamond Head “we thought we’d do something a bit special. We haven’t played this since 1984. That was a good year…..I was born.”

“Knight of the Swords”, by the way, is just as promised, but way to go Ras, how to make hundreds of people jealous.

Within that joke though, there’s a couple of hidden, but still greater, truths. First, this band has been around a hell of a long time, and has in that getting on for 40 years built up one of (perhaps) the most underrated back catalogues in heavy metal. They were one of the originators of course, when NWOBHM meant new, and that is the second strand of truth in what Andersen says. They are a band that has just kept evolving throughout that time.

To that end long-serving four stringer Eddie Moohan has left – this is a recent event given that he was all present and correct when MV saw them last in the Spring – but where most bands would bleat, moan and possibly cancel dates, Diamond Head simply get on with it, draft in Dean Ashton, and carry on kicking out the jams.

Of course it could be argued that DH have spent too long out of the limelight anyway. Years without touring, even longer without an album, were ended with a mighty fine effort this year. The self-titled collection saw them re-invigorated, and the live shows likewise.

And, if they were good in the spring, then here they surpass it in every way.

Crackling with energy from the get go with “Wild On The Streets” the 90 minutes here is relentless. Not for nothing does the singer liken it to a runaway train at one point. An inspired mix of the new, the classic and the surprising, there’s clearly been much thought given to the structure here. Because for every “Lightening To The Nations” there’s a recent addition such as the wonderful “Shout At The Devil” and a superb “Diamonds”. The songs you might not expect are magnificent too, “Starcrossed” a 1993 collaboration with Tony Iommi was given its live debut at Bloodstock last weekend and is worthy of another inclusion here.

For all that they obviously want to progress the band – and in Andersen, who is a fine frontman, imposing with a phenomenal voice have found the man to do it – Diamond Head are acutely aware of their past, so “The Prince”, “It’s Electric” and “Am I Evil?”, surely one of the great metal standards, are lovingly tossed out with all the excitement of a set of songs they’ve never played before, and get the appropriate – and only possible – response.

On an evening of the unexpected they even come back after the latter, for a snarling “Dead Reckoning” and a soaring “Streets Of Gold” and it all confirms one thing: this might be something more than a glorious renaissance for Diamond Head. It might just be a golden age.