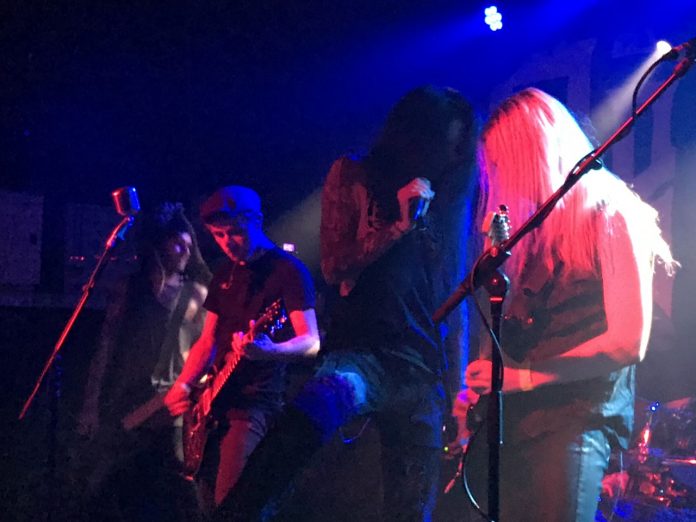 Back in the late 90s/early 2000s, when the internet was just beginning to take off, MV was in an online record club. Sort of like a modern version of the tape trading scene, a lot of the bands we had stuff from then specialised in downtuned guitars, but bubble gum hooks, bands like B Movie Heroes, The Chasers and countless more. If Changes One was still going then you can bet your life The Blacklist Saints would have been its current poster boys. Songs like “Keep On Fighting” or in particular their early material like “Reckless Choice” are exactly the sort of sugar coated harmonic boot to the nutsack that is as much fun now as it was then. “Last Way Out” – the first song they ever wrote – is a highlight as is “World For Company” which is turned into something of a gleeful singalong. “Amy Ray” from their new album, with its chunky, Jimmy Eat World style guitar work is bigger and with “Est 83” playing things out, there is much to commend their set. As the great Singer Songwriter Billy Bragg once said, “If you’ve got a blacklist I wanna be on it” and even though he probably never joined the same record clubs as we did 20 years ago, we’ll borrow the sentiment.

Losing their vocals is probably not how Mallen envisaged this gig starting, but then, at least it proves they were live.However, they are nothing if not experienced these days and after singer Kelly eventually gets herself plugged in, the local five piece set about proving why they are one of the Midlands busiest bands. It’s been a while since MV had seen them, and you can’t help but be struck by how big the sound has become and also how polished songs like “The Other Side” are. That one is from a new EP due this year and will evidently be a leap forward for them. At their best when they are showing off their heavier side, “Your Own Worst Enemy” for example, packs a real punch, as does “Jack Of Hearts” which is probably their stand out moment. For Mallen, however, the best you suspect is still to come.

“We’ve played all over the place”, says Alex Cooper, “but never here, which is mad considering we are from Birmingham.” You have to say he has a point. That said, this is a hometown homecoming with a difference. Because Devilfire are in many respects just getting cracking. Their debut album is out at the start of October – we’ve heard it, it’s a belter – which means two things. First this amounts to a warm-up, but second, most of the people here don’t know the tunes they fill their 40 minutes with.

You can be sure of that, because they are huge songs with the intent and the swagger to bother arenas in the future never mind the Academy 3. The huge chorus to “You Gotta Revolution” is absolute proof. “Devil In Your Eyes” is essentially more of the same, while the single “She’s Like Fire” knows its way around the 1980s hard rock scene just fine.

The songs on the record that will become favourites are all here, “In And Out Of Love (All Of The Time” is played for the first time here and allows guitarist Baz to showcase some real bluesy diversity.

There is no doubt though, about the standout highlight. “Waiting For A Rockstar” is far too big to contain, the best thing on the record, it is also the best thing here, and when it has been out for a while its true potential as a hit will surely be seen.

Like the band themselves though, it has a bright future. This (Devil) Fire, truly is only just getting started. Stand well back when they get into full flow this autumn.