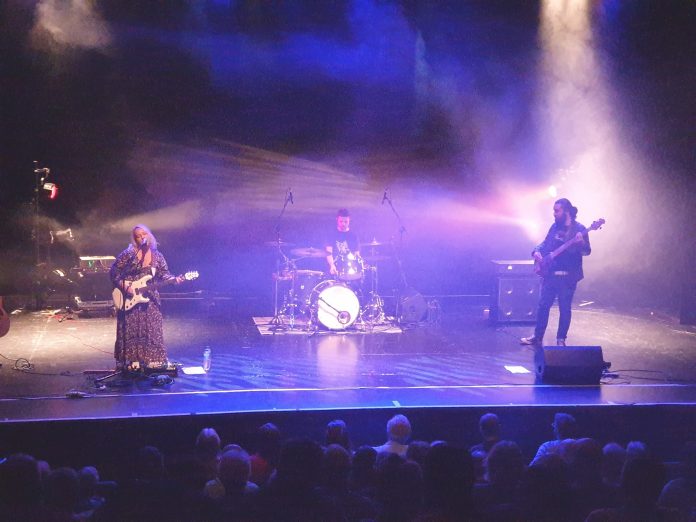 This, to use the football cliché, was a gig of two halves. Not in terms of consistency – they were both superb – but literally.

“We are doing something a bit different tonight,” Chantel McGregor had said at the start, before she’d played “Anesthetise” acoustic. “We are going to do two sets, so you can go to the bar and stuff…..”

After that, she’d smiled. She does that a lot. And in my notes at, well, half time (you know, the bit in the football match where me and my brother are ranting because our team is losing again…..) I’d written the bullet point: “looks happy to be here….”

In the second half she explained why.

Introducing the band – and isn’t there something just perfect about a trio? – she got to bass player Nic Southwood and to cut a long story short, she only met him at 2.30 this afternoon. Their usual four stringer couldn’t make it, and the stand-in “didn’t fancy it……”

This would have been bad enough, except that two of the audience members had come all the way from America for the show the night before and tonight, “so it was kind of important we got a bass player…..” says Chantel, smiling in a way that suggests that she wasn’t smiling last week…..

From out of the adversity, though, came some wonderful music, as the three – completed by Thom Gardiner on drums – play a quite wonderful show.

The thing about McGregor – I’d heard her two studio albums but never seen her live – is that she is as good a guitarist as there is (for goodness sake, listen to the solo she plays on “Inconsolable”) but doesn’t feel the need to overplay. Indeed, only once is there an instrumental, the brilliant “April” which is on her new live album (“it’s in the foyer and I’ve got a new card scanner thingy….”) the rest of the work just breathes alongside the songs.

They are fine songs too! “Take The Power”, with its screeching riff and McGregor’s voice moulding perfectly, the righteously sleazy “Like No Other” and “Lose Control” are right from the top draw.

There is also a glorious haphazard nature about the whole thing too. There’s a setlist, but she doesn’t seen to pay much attention, asking the band “shall we do…..?” more than once. The vibe is wonderfully relaxed.

“Southern Belle” changes tack a little, and is funkier, “Your Fever” boasts a genuine heavy metal power chord, which suggests if you fancy pigeonholing this you can forget it, I mean crikey, “Burn Your Anger” even sounds angry, and you can’t say anything else does.

Before she plays “Walk On Land” McGregor says, “this is our official last song, but you’ll shout more and we’ll come back on”, which is what happens too. And “Freefalling” is a mighty encore.

“Thanks for coming I hope you had an awesome time, tell your friends…..” she says as she leaves, and that’s basically it in a nutshell. Chantel McGregor is almost like a cottage industry, like Marillion or The Levellers.

That’s brilliant, but talent – and a stage manner like this – deserves so much more.