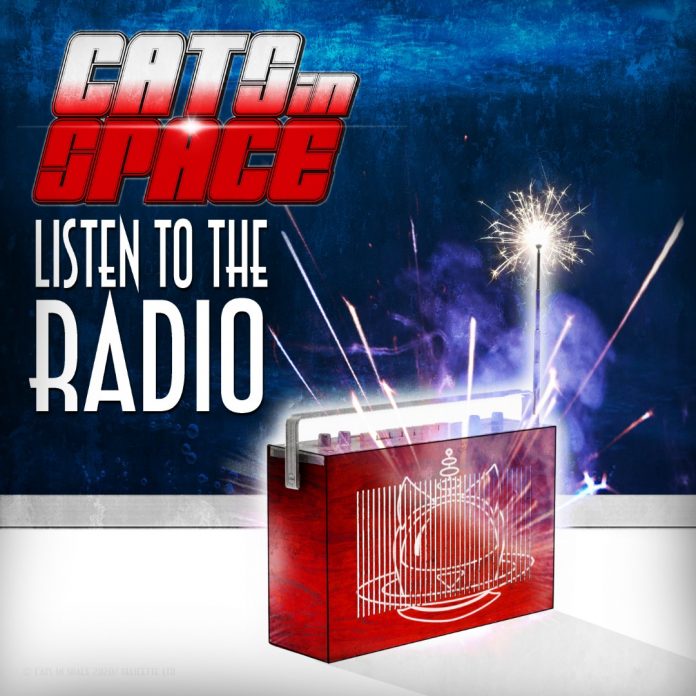 CATS in SPACE return in 2021 on FRIDAY FEBRUARY 5th for the release of the new single ‘LISTEN TO THE RADIO‘, the second single to be taken from their hit album ‘ATLANTIS’. This classic slice of ‘Power Pop’ is another surefire smash and will be available on all digital platforms as well as in CD format via their online Webstore https://webstore.catsinspace.co.uk/ . With their trademark ‘wall of vocals and guitars’ sound set to stun, the tune will blast through the airwaves in a way only CATS in SPACE know how. A firm favourite cut already, this song, accompanied by yet another fantastic video, will ensure the bands’ current album ‘ATLANTIS’ rides through the choppy waves of 2021 and beyond.

Indeed, as the success of the album gathers pace, their newfound fans overseas as well as on home turf have ensured the new album is already by far their most successful to date, with sales reaching record numbers inside the first three months of release. So much so the album amazingly went ‘straight to No.1’ in the UK’s Official Independent Album Breakers Chart in the first week of release and No.53 in the Official Album Chart.

“Thanks to the incredible support of our fans and the live stream show produced in collaboration with ‘Better than Live’ before Christmas, 2020 was our most successful year in terms of sales. Despite the horrors of Covid-19 it has been yet another magical ride that doesn’t appear to be stopping anytime soon”.

The band are all poised and ready to start touring this summer, including two headline festival appearances and their own headline tour in the autumn. Plus there is very exciting news to come on the ‘live shows front’ and more huge news for the winter.

Yes, 2021 is going to be another very busy year for the mighty CATS in SPACE, so come ‘Dive With Us’ into a brighter future and get ready to rock.

“EVERYBODY WANTS TO BE A CAT”