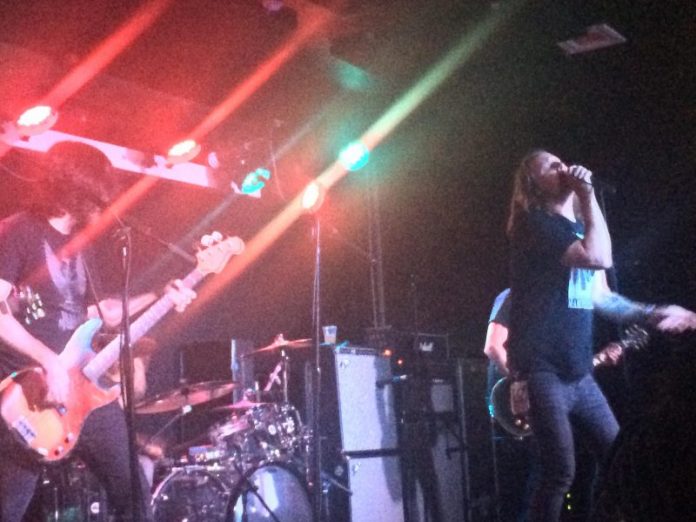 The forgotten band of Seattle?

It’s a truism that has held since the beginning of rock and roll. There are certain artists that just pack more of a punch on stage than on their records. Pete RG is definitely one of those. There’s no doubting the fact that songs like “Reload” are harder edged here than on the “Tender Souls” record that came out last year. What hasn’t changed though, is the quality of the songs he has put together. “Heaven Knows” would be middle of the road in lesser hands, here it soars. The title track benefits from some fine guitar and the understated keyboard work of Brina Kabler adds to the sound too. RG is a more energetic performer than you might expect as well, taking a couple of opportunities to get up close and personal with his new friends, including the sweeping last song, “I Believe”. Apt really, as there’s nothing to doubt here at all.

The last time Jeff Angell was in these parts it was as the singer in Walking Papers, which means two things. First, he got to stand next to Duff McKagan, which leads on to the second point, namely that whatever else MV writes about this 40 minutes, and whatever else happens in life, he’s already won. He’s back here as the frontman in Staticland, a band with no bassist at all, but with clever use of keyboard and drums to create a more bluesy sound, as well as possessing Angell’s hypnotic presence. This is coupled with a huge smattering of very good songs indeed. “If You Only Knew” is a huge, brooding, sprawling thing and sees Angell engage rather like RG, but with a touch more darkness, with the enthusiastic if not huge Tuesday January crowd. “The Edge” is fast and furious, and things conclude with a gentle,uplifting message of hope in “Let The Healing Begin” which appears to have special resonance given events in his homeland right now. Although not directly like the magnificent Walking Papers, with Staticland Angell has again delivered something compelling and interesting but more than capable of heads down rock n roll when it needs to be. A full set, you suspect, would be something to comprehend.

The intro tape right before they come on stage gives it away. Everything from “Touch Me I’m Sick” to “Man In A Box” by way of Nirvana and Pearl Jam is right here, before a voice simply says: “will you welcome back Candlebox…” This is their first tour here in a long time, and hearing those songs convinces that the five piece – featuring original singer Kevin Martin – are very much the forgotten band of that era and that scene. Their 1993 debut record got them on Madonna’s label, and to number seven in the charts. Even if that was their peak, then the incendiary way with which they approach their hour tonight suggests that they really don’t mind.

“Bitches Brewin'” is early in the set proof that there is life in these old dogs, racing as it does, and Martin – a study in perpetual motion throughout – is in suitably feisty mood, aiming shots at Donald Trump (it’s fair to say he’s not a fan…) and organised religion, as well as Nickelback. There’s a seemingly off the cuff version of Kiss’ “Do You Love Me?” to prove what rock n roll is, and there’s a general feeling that this a lot less slick than you thought it might be – which is to its credit.

Where a lot of bands would have done the debut, waved and got back on the bus, Candlebox opt for the career spanning set – and rightly so too, when “Sweet Summertime” is the result. Elsewhere, “Cover Me” drips with a fine mixture of understanding and vitriol, as this version of the band takes things into a fine new sphere.

The  last three are both as good as it gets, but also sum the night up. “You” is delivered as if lives depend on it, another song from the debut “Far Behind” is a tender tribute to Andrew Wood, and the last tune “The Bridge” showcases last year’s “Disappearing In Airports” perfectly.

They might have never quite had the recognition they deserved, but if Candlebox are bitter they don’t show it. What they do deliver is a show filled with a real energy, which is no mean feat given the amount of people they play to. “Just tell everyone there were 15,000 people here,” offers Martin at one point. “After all, alternative facts are all the rage the moment….” here’s one thing from America right now, however, that doesn’t need spin.Candlebox’s performance speaks for itself.