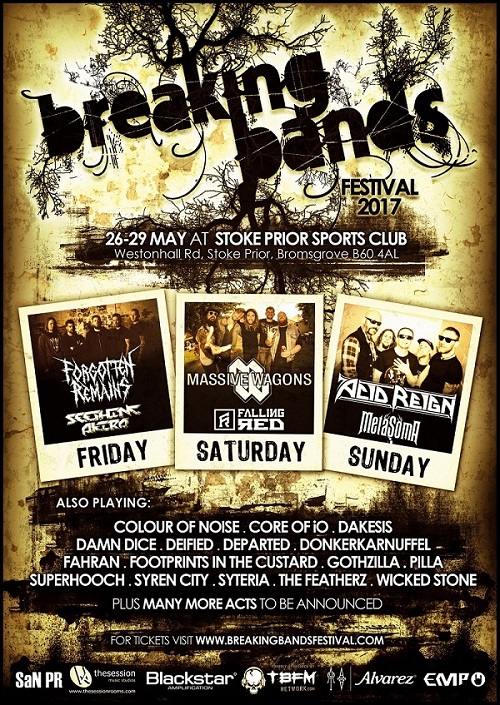 The BREAKING BANDS FESTIVAL keeps on going from strength to strength and next year’s festival promises to be the best yet. Taking place at the Stoke Prior Sports & Country Club in Bromsgrove, the Festival is renowned for delivering the very best up and coming Metal, Punk and Rock bands to the general public, and this year’s event will be no different. True to form, Breaking Bands Festival will showcase even more bands in 2017, and this year there will also be an increase in events. As with previous years, the festival runs for three full days throughout the late May Bank Holiday, which falls on 26th-28th May 2017.

If you’re new to Breaking Bands Festival, then you’ve been missing out. Organised by Mucka Jay and the team at TBFM, the festival was founded in 2015 and every event to date has sold out well beforehand. Hundreds of tickets have already been snapped up for next year’s event, so Breaking Bands will once again sell out. To purchase your tickets, visit breakingbandsfestival.com/shop and discover the new bands of tomorrow, today!

A UK thrash band formed in 1985, split in 1991 & rebooted in 2015. Since returning to the stage, the band have enjoyed a success of gig and festival slots including headlining Bloodstock Open Air 2016 on the SOPHIE Lancaster stage.

Colour of Noise hail from Brighton, England and are steeped in the tradition of the late 60’s British blues boom, and early 70’s stadium rock. A must watch Classic Rock band.

Damn Dice are a five-piece Hard-Rock / Metal band from London. At the forefront of the UK’s underground rock scene, they spit out adrenaline fueled performances and larger than life stage shows that have quickly earned them a loyal and expanding fan base.

Heavy metal five-some coming at you from St. Helens, Merseyside, Deified’s aim is to bring their energetic live show to as many people as possible. Winning the Merseyside Metal 2 the Masses competition 2015 led them onto playing Bloodstock Festival 2015. 2016 will see the band supporting the likes of Exodus (USA), Lost Society (FIN) Collapse (UK) and travelling as much as they can around the UK.

Departed are a 4 piece rock band featuring former lead guitarist of The Treatment, Ben Brookland, and vocalist Mark Pascall, lead singer of Empire of Fools. Add into the mix Howie and Connor, and you have a brand new rock band making waves across the UK.

Fahran have appeared at prestigious festivals including Bloodstock, Download Festival, Hard Rock Hell, and Isle of Man TT Races and have toured with Heaven’s Basement, Kamelot, The Answer, UFO and many more. With 2 successful albums, this is a band that has worked for all they have achieved, leaving them with a seasoned gravitas. Fahran continue to forge a sound far greater than the sum of their parts, that is redolent of no one and entirely their own.

As self-proclaimed forerunners of the “UK Rock Revolution”, Falling Red have taken their high octane brand of rock & metal from the UK Club scene to the legendary Hammersmith Apollo, all in less than three years of releasing their critically acclaimed debut album, ‘Shake The Faith’.

Alternative goth rockers from Edinburgh likening themselves to Sisters of Mercy, Killing Joke and Deathstars Gothzilla. Although quite fresh to the UK rock festival scene, they class themselves as the alternative to the alternative, and need to be checked out.

Well-known name on the live circuit, Massive Wagons have already released 3 successful albums, played major stages and toured the UK and Europe with some of the elite in the rock scene. Playing their own brand of rock ‘n’ roll, Massive Wagons are a crowd pleaser whereever they roam.

Metasoma have a unique blend of culture and style which fuses rock n roll with heavy metal. With a reputation for winning over the crowd at every venue, this group lives for live shows, evidenced by the number of concerts they have performed to date.

With their progressive metal sound, the band aim to combine atmosphere, power and technique. They put a lot of consideration into the visual and aural effect of their band. At gigs they aim to deliver darkness and heaviness that draws everyone into the place their music comes from. The bands vocalist’s character on stage, is a physical embodiment of the pain and destruction in their music.

Syren City take their influences from a wide range of punk, metal and hardcore, combining to make a colossal British hard rock sound. The band have firmly established themselves amongst the underground scene.

They carry the torch of Glam which has been re-ignited by the fire of punk. Glitter and leather, high heels and feathers, the world needs Flock Rock and they have more than enough to go around. Ignore them at your own risk.