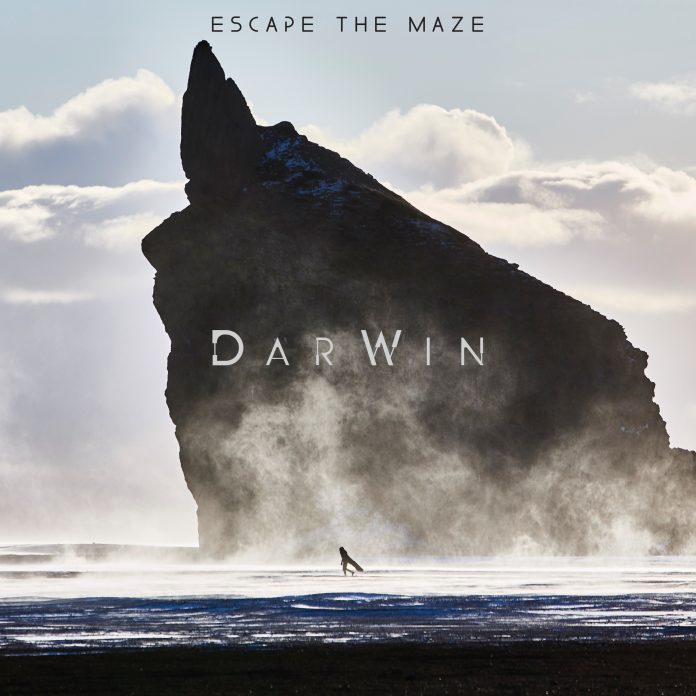 Welcome to the near-future: the world of DarWin. An epic and intricate musical fantasy concept that will launch on the 9th November 2018 with the ambitious release of “Escape The Maze.”

It’s roughly ten years from now into the future, 2028. An exhausted ecology, and global conflicts, have led to a huge upheaval of the world order, straining and diminishing human populations. The lives of everyday people and families have been turned upside down by the intense ecological pressures related to climate change. No longer just a theory discussed by scientists and politicians, climate change is wreaking havoc on the world. Chaos and confusion reign as fighting for basic resources continuously escalates. “Day Zero” has occurred, when nuclear attacks punctuated what had for many years been a civility between nations and people. As Earth rejects life, those of us who remain struggle to survive.

DarWin wakes. Alone, confused and surrounded by the unknown. How did he get here, and who is he? He starts a journey from a mysterious dark cave to find civilization, discover his past, understand the present and try and forge a future in the chaos that surrounds him. Splintered memories return to him of his past: a simple but comfortable life, a beautiful wife, a lovely child, a cosy family. Where are they now?

He makes his way across a strange, desolate land, and upon finding a lone truck on a road, collapses from exhaustion. When he wakes, he is surrounded by a mysterious group of women, working with technology, not just to save him, but to…upgrade him. They are turning him into a next generation man. The next step after Homo sapiens. Software and processing power is merging with his body. And with this upgrade, as he rises from an operating table, under the watchful eye of this group of women, he discovers powers. Powers that he doesn’t fully understand but might yet hold a key not only to his own past, present, and future but also to a planet Earth groaning under the weight of mankind, on the verge of collapse. The powers allow him to navigate space time, and, it seems, interject his will onto the unfolding of events. He can reverse events. Can they allow DarWin to turn back the destruction of the Earth—the apocalyptic present? Can the efforts of one upgraded man be enough to turn the tide for humanity? To restore our planet? Just one man alone? Can these powers even possibly bring back…his family? The story is just beginning…

“Escape The Maze” is the first installment in an epic saga that addresses the challenges of mankind in our coming era. It depicts the role of a changing planet, and the potential, as well as limitations, of technology to help solve mankind’s greatest challenges. The story of Origin Of Species will continue through music, graphic novels and videos.

A complex project that’s eschews the hollow immediacy of much contemporary art. A story that demands attention and imagination. With music sweeping in scope, at times evoking hard rock virtuoso shredding, alongside grand orchestral compositions, warm harmonies and soaring choruses.

“Escape The Maze” will be released digitally and on 12” “Splattered” coloured vinyl. The release will also feature two further tracks “The Last Chance” and “Escape The Maze (Orchestral version)” – both include performances by the Chamber Orchestra Of London conducted by composer Matt Dunkley (known for his work on film scores for Ironman, World War Z and Inception) and recorded at Abbey Road, London, Studio 2.

“Escape The Maze” tracklisting is as follows